The Daily Life Of Chinese Hui 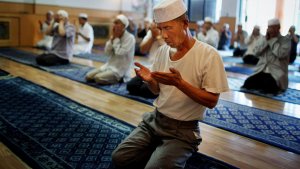 YINCHUAN, CHINA – JULY 18: Muslims of Hui ethnic minority attend a prayer at the Xiguan Mosque on July 18, 2010 in Yinchuan, China. The Hui ethnic minority are descended from the Arabic and Persian merchants who came to China during the 7th century. With a population of 10 million, the majority of the group lives in the Ningxia Hui Autonomous Region, however there are Hui living in almost all the provinces and cities of China. (Photo by Feng Li/Getty Images)